skip to main | skip to sidebar

Not So "Natural" Flavors... 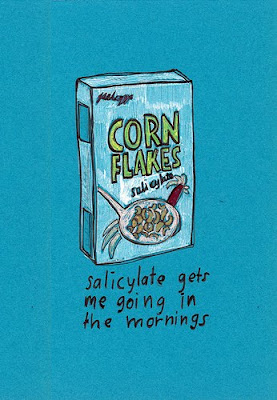 Walking through the aisles at the grocery store there are hundreds of packaged, canned, processed foods.  Many of these products have flashy labels and are plastered with messages like 'high in fiber', 'lowers cholesterol', 'strengthens immune system', etc.  These messages lead shoppers to believe that the products are healthy and may actually fix their current health conditions.  Furthermore, the nutrition label might not even look too bad.  But... then there's the ingredient label - it's the tiny print - filled with strange words that are unpronounceable to all but the most advanced food scientists and chemists.  Most shoppers completely ignore this lengthy list focusing on the nutrition facts alone.  Have you ever wondered what maltodextrin, BHT, and yellow #5 actually are?  Wonder no more!  Here's a look at some of the most common food additives, what they are, where they're at, and what you need to know about them.

Butylated Hydroxytoluene and Butylated Hydroxyanisole (BHT and BHA)
What they are: Antioxidants used to preserve fats and oils.
Where they're at: cereals, granola bars, beer, breads, crackers, etc.
FYI: BHT and BHA are derived from petroleum (click the link for a definition).  BHA has been shown to cause cancer in animal studies and the Dept. of Health and Human Services has catagorized it (BHA) as "reasonably anticipated to be a human carcinogen".

Artificial Flavors
What it is: A clever name for a whole bunch of 'allowable' chemicals like - phenylacetaldehyde, butyl alcohol, etc....
Where it's at: Almost EVERY packaged product on the shelves, from Wheat Thins to granola bars.
FYI: The label just says 'artificial ingredients', you never know exactly which ones.

Saccharin, Acesulfame Potassium  (Acesulfame-K), Sucralose, Aspartame
What they are: Calorie free sugar substitutes.
Where they're at: LOTS of 'No Sugar Added', 'diet' products - sugar free pudding, jello, ice cream, diet soda, yogurt, gum, toothpaste, etc.
FYI: The FDA says they're okay, but many people report unfavorable side effects such as dizziness, and headaches.  Additionally, many artificial sweetners have been linked to cancer in animal research and even though sugar free, they still cause an insulin response in many people.

Modified Food Starch
What it is: Starches modified to change their response in different temperatures, used to thicken, emulsify, or change food texture.
Where it's at: Many diet foods, processed foods, cookies, frozen and boxed meals, etc.
FYI: These starches can come from potato, wheat, rice or corn.

Sodium Nitrate and Nitrite
What they are: Preservatives used to maintain pink color in meats and fish, and to prevent bacteria from growing.
Where they're at: Deli-meats, hot dogs, bacon, packaged meats, sausage, canned meats, etc.
FYI: Both Sodium nitrite and nitrate, when they react with amino acids, form nitrosamines which have been shown to cause cancer.

Interesterified Fat
What it is: A trans-fat alternative made by chemically blending hydrogenated oil with non-hydrogenated oil.
Where it's at: Margarine, baked products, cookies, crackers, canned soup, frozen meals.
FYI: This type of fat has been shown to stimulate an increase in blood glucose levels and decrease the insulin response as well as increase the LDL:HDL ratio.  BAD!!

Carmine or Cochineal Extract
What it is: A dark-crimson colored pigment.
Where it's at: yogurt, juices, candy, yellow cheeses, imitation lobster and crab meats, popsicles.
FYI: It comes from the dried bodies and eggs of the Dactylopius coccus (it's an insect...)

Hydrolyzed Vegetable Protein (HVP)
What it is: A flavor enhancer most often made from soy.
Where it's at: Jerky, canned soup, meat flavored products, frozen meals
FYI: MSG is a 'hydrolyzed protein' product.

Ascorbic Acid
What it is: Vitamin C.
Where it's at: Juices, cereals, fruit snacks, applesauce, etc.
FYI: It can be used as a preservative, but often it is used to make an nutrient void food appear 'healthy' - 'Contains 100% of your Vitamin C needs'.

Carrageenan
What it is: Extracted from red seaweed, it serves as a stabilizer, emulsifier and thickener.
Where it's at: Ice cream, cool whip, yogurt, pudding, jam, etc.
FYI: In animals carrageenan has been shown to cause ulcers, digestive cancers and colon inflammation.

Lecithin
What it is: An emulsifier and antioxidant used to prevent fat from going rancid.
Where it's at: Margarine, nut butters, ice cream, packaged baked products.
FYI: Lecithin can come from either egg yolks or soy.

Propyl Gallate
What it is: Often used with BHA and BHT, it's an antioxidant used to prevent rancidity of fat.
Where it's at: Jerky, sausage, oils, margarine, mayonnaise, many fatty foods.
FYI: Studies in animals have linked Propyl Gallate to brain cancer.

Well, there you have it a 'short list' of the many food additives and preservatives that are being dumped into packaged and processed products.  My advice - stick primarily to foods that don't need labels- vegetables, fruits, fresh meats, etc.  And when buying packaged products, check out the ingredient list and remember - Less is More!!

Where I Hangout - Links